Ellen DatlowWednesday Jan 9, 12:47am ESTChizine would be spending less than half that on production including

I don't know who prints their books. As a successful medium press publisher I trust them to do a great job (their books all look fantastic).As I've already said. Bypassing the slush pile is not about the anthology -Chizine Publications is a BOOK PUBLISHER-it is their slush pile NOT the anthology slush pile. Of course the book publisher reads their novel slush. I do not work for the book publisher. I am a freelance anthologist.Joe Lansdale, Lucius Shepard, Laird Barron, Jeffrey Ford, Brian Evenson, Michael Marshall Smith are some of the writers who will be contributing stories. I chose those for the premiums because I know I can count on them writing great stories.Does that help?http://chizinepub.com/

Ellen DatlowWednesday Jan 9, 12:47am EST
Another inaccuracy: I've never said the eBook would be sold for $15. That's the premium.
Chizine sells most of their E-books for $9.95.


Paul ManneringWednesday Jan 9, 1:25am ESTThanks,This is why I am asking you the questions - because there is a high risk of mis-information wthout getting comment from both sides.As you are a professional editor and Anthologist, I accept you are entitled to take your fee.My question is: Do you believe that taking that fee in advance (of publication) from a crowd sourced fund is appropriate? Wouldn't it be more appropriate for ChiZine Publishing to absorb the costs of production - including your fee as part of their operating capital?Is this the evolution of crowd sourced projects? Do you believe that the person/company who sets up a Kickstarter or similar project is justified in setting a higher funding goal with the intention of taking a profit from the funds raised?Once all costs are covered by ChiZine (including your fee and production costs related to the book) what is the plan for the remaining funds? Are you involved in making that decision or can someone from ChiZine comment?FYI: I am continuing to update the blog post with verbatim copy-pasta of the discussion. I have information from other sources (including two pages from the Shocklines forum thread that was deleted).


Which is why I contacted Ms Datlow directly in the first place. Clarification on the conjecture and claims being made online, giving her a chance to correct the assumptions being made on public forums.

A bit of digging revealed a cached version of the Shocklines forum thread that was deleted by the forum moderator. Sources have suggested that the conversation ended after Ms Datlow expressed concern that her reputation was under threat. And other sources have also said that the Shocklines moderator will delete a thread if he receives complaints from anyone about that thread.

What Ms Datlow's original post on Shocklines does clarify (as does her response above) is that the "pay $100 to by pass the slush pile" relates only to submissions of Novel Manuscripts submitted to ChiZine and which ever way you look at it, 30 people did pay to get their writing read by editors at the same publisher that is publishing the anthology. 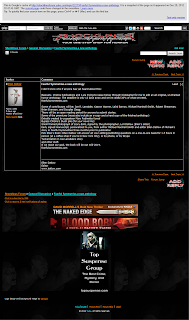 The thread then continues, with the supporters and the questioners, and this being the internet, it gets ugly.

One contradiction does appear - if you contribute $15 to the project, you get an ebook edition of the book. But if you want to buy the book, Ms Datlow has said that ChiZine sells most of their ebook catalogue at around $9.95.
So, why not a $10 contribution to get an ebook? Why the premium charge?

As Ms Datlow points out in the Shocklines thread, this is a larger press with extensive overheads so it costs them 10 times as much as a small press or self-publisher to produce a book. If anything this suggests that the brick-and-mortar book publishing industry is really, really in deep shit. There are apparent advantages in offset printing and making fine quality paperbacks - though Createspace produce nice hardware too. But there is no difference to any ebook no matter what format it is published in.

In conclusion, I accept that ChiZine are exploiting a new option for raising funds for covering the costs of publishing books. I also understand that as absurd as it appears in today's publishing environment companies are spending $25,000 on producing a single book. Most of them are expecting to recover that money through sales, though that might change in the next few months given the success of this Kickstarter project.

It is becoming clearer why "medium" press publishers and their big brothers are shitting bricks over ebooks and DIY publishing. The future seems brighter every day for highly experienced and talented editors and producers of books, like Ms Datlow.

The published anthology is likely to be of a high standard, with a strong line up of reliable authors and some great stories. The 2-3 non-best selling writers who also make it through the selection process will have the opportunity to congratulate themselves on a professional sale, and see their names in print with some great writers.